When it is time for the School Council to be re-elected, year on year, we hold an election in school.

Everyone takes this very seriously and we try to show democracy in action with everyone involved throughout the school. Candidates write and present their speeches about why they wish to represent their class. The class then votes on the top two candidates to go forward into the election day voting.

On Election Day, classes, one by one, enter the Hall and post their votes into the Ballot Box. Year 6 are usually the Election stewards who monitor and observe to ensure the election runs smoothly and is a fair and honest process. (We even have security guards on the doors).

The children visit their voting booth to cast their vote; even our Early Years children take part (helped by Year 6 Booth Officials). After each class has voted, the ballot Box is emptied and the votes are counted. We use tallies which are carefully checked and counted by our Year 6 officials to ensure the vote count is correct. . 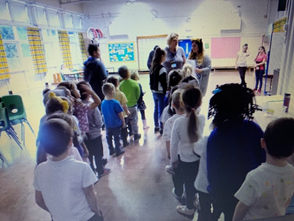 Finally, the votes go to the Returning Officer who makes a note in secret of who has won.

Usually the elected School Councilors are announced in a whole school assembly, held the next day.

The new School Councillors are officially announced,  applauded and are presented with shiny new badges, ready to start tackling areas for improvement with the aim of making a real difference to Hightown.